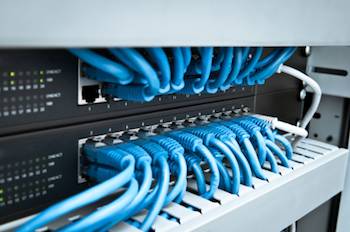 Modern computers and other electronics require the Internet. With the help of an Ethernet LAN (local area network), you can connect all your office equipment, as well set up a  entertainment system that ties it all together. Providence Electric can install Cat5, Cat5e and Cat6 Ethernet systems.

Category 5 (CAT5) is a form of Ethernet cable used to connect office computer networks. CAT5 cable contains four pairs of copper wire. It supports fast Ethernet speeds up to 100 Mbps. But, CAT5 cable runs are limited to a maximum recommended run length of 328 feet.  The newer specification for CAT5 cable is CAT5 enhanced or CAT5e will support networking at speeds up to 1000 Mbps.

CAT6 supports Gigabit Ethernet speeds up to 1 gigabit per second (Gbps) and supports communications at more than twice the speed of CAT5e, the other popular standard for Gigabit Ethernet cabling. An enhanced version of CAT6 called CAT6a supports up to 10 Gbps speeds.

What is the general difference between category 5e and category 6?

Contact Providence Electric for more information about commercial network solutions and to schedule your electrical service.

Contact Providence Electric at (817) 721-0794 or use the form below to schedule your residential electrical service.